A growing divide: How income inequality affects US homeownership rates

The debate about the future of housing finance in the US has been ongoing since the government-sponsored enterprises (GSEs) Fannie Mae and Freddie Mac were put into conservatorship at the height of the 2008 Financial Crisis. A major flashpoint in the debate relates to the appropriate role of the government in housing finance.

Lawmakers’ positions span from eliminating or dramatically reducing government support for housing, to maintaining the current patchwork of explicit and implicit subsidies and interventions, to explicitly increasing support for low- and middle-income homebuyers, whether through the GSEs or through other means, like the FHA. With COVID-19 raising both hardship for individuals and families, and the strain on government finances, US policymakers face complex choices to support homebuyers.

US homeownership rate comparable with other countries despite higher government support

The US government’s housing policy is one of the most supportive among developed countries. The government today backstops two-thirds of all US mortgage credit risk.1

The US offers more comprehensive housing finance support than other countries 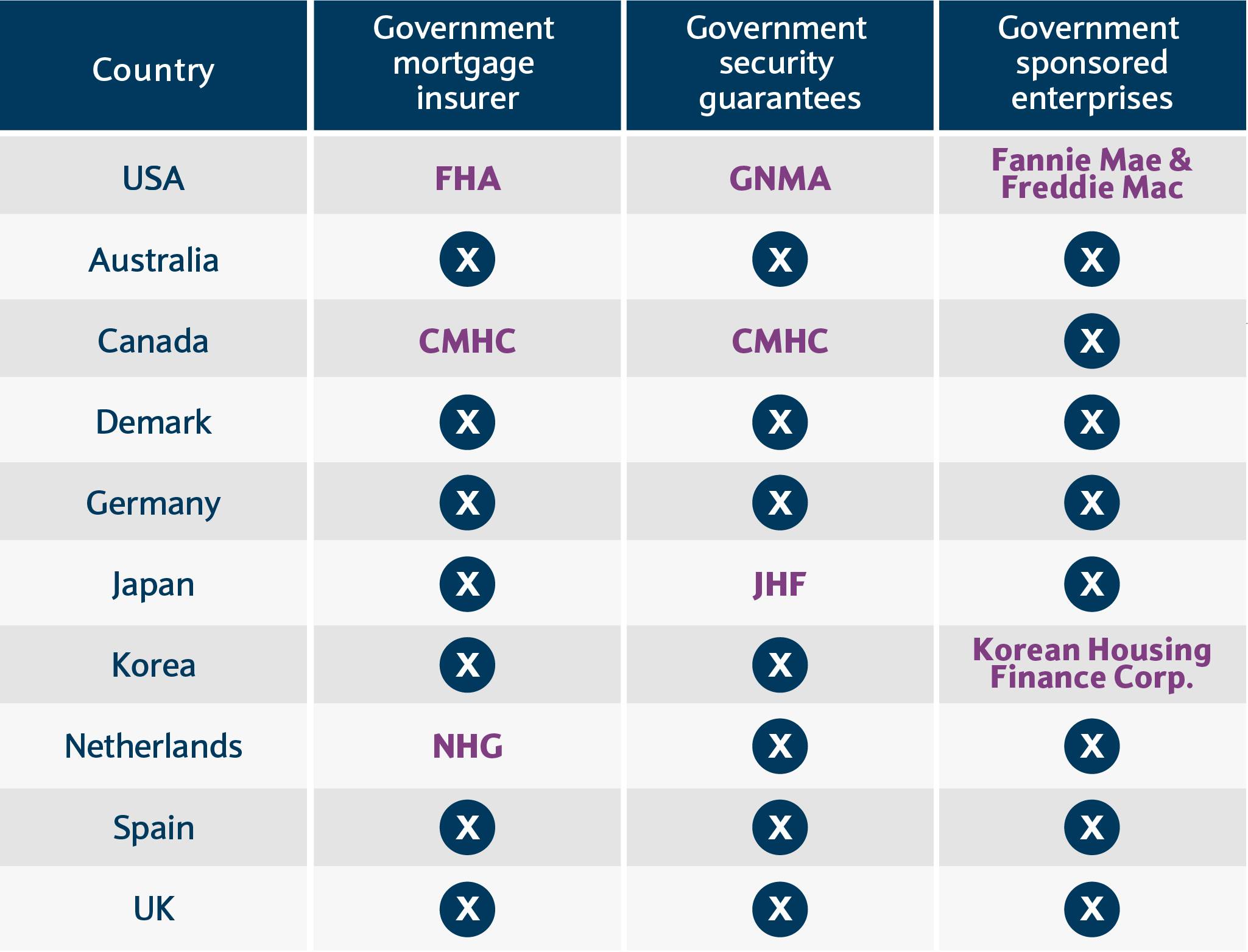 Various policies, including subsidies, regulations and taxes, are geared toward raising US homeownership levels by giving more borrowers access to mortgages and at lower interest rates than available in the private-label mortgage market. In particular, the 1992 GSE Act, which required the GSEs to increase purchases of mortgages originated by low-income borrowers, was a milestone in US housing policy, seeking to promote homeownership among underrepresented and underserved groups.

Affordability targets were introduced, requiring 30% of the loans bought by Fannie Mae and Freddie Mac to be made to people at or below the median income in the communities where they lived. These targets steadily increased, reaching 56% in 2008, but have fallen back since the financial crisis, to 24% in 2015.

Some argue that the current structure of housing finance in the US does little more than encourage better-off households to purchase larger and more expensive houses. Our analysis indicates that this may be too simplistic an interpretation. Instead, we focus on US-specific structural inequalities and suggest that government intervention has enabled the US to achieve levels of homeownership comparable to other developed countries, despite higher (and rising) levels of income inequality.

The gap between rich and poor in the US is higher than in most developed countries and is steadily rising, with top earners greatly outpacing the rest of the population.

Income inequality around the world 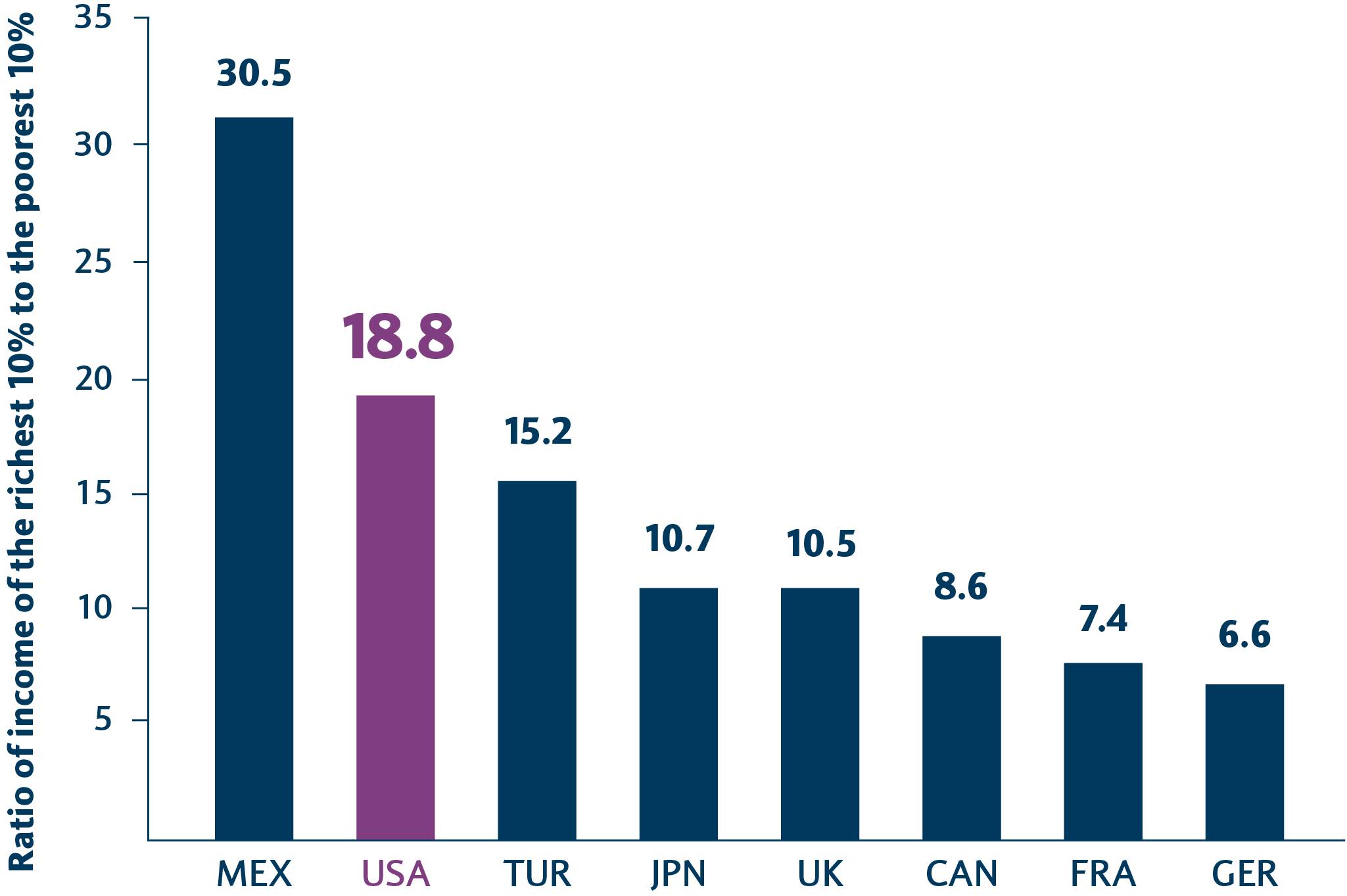 Source: OECD Income Distribution Database, Data 2013-2015
Note: The chart shows the ratio of disposable income of the top 10 % earners to the bottom 10 % for each country. 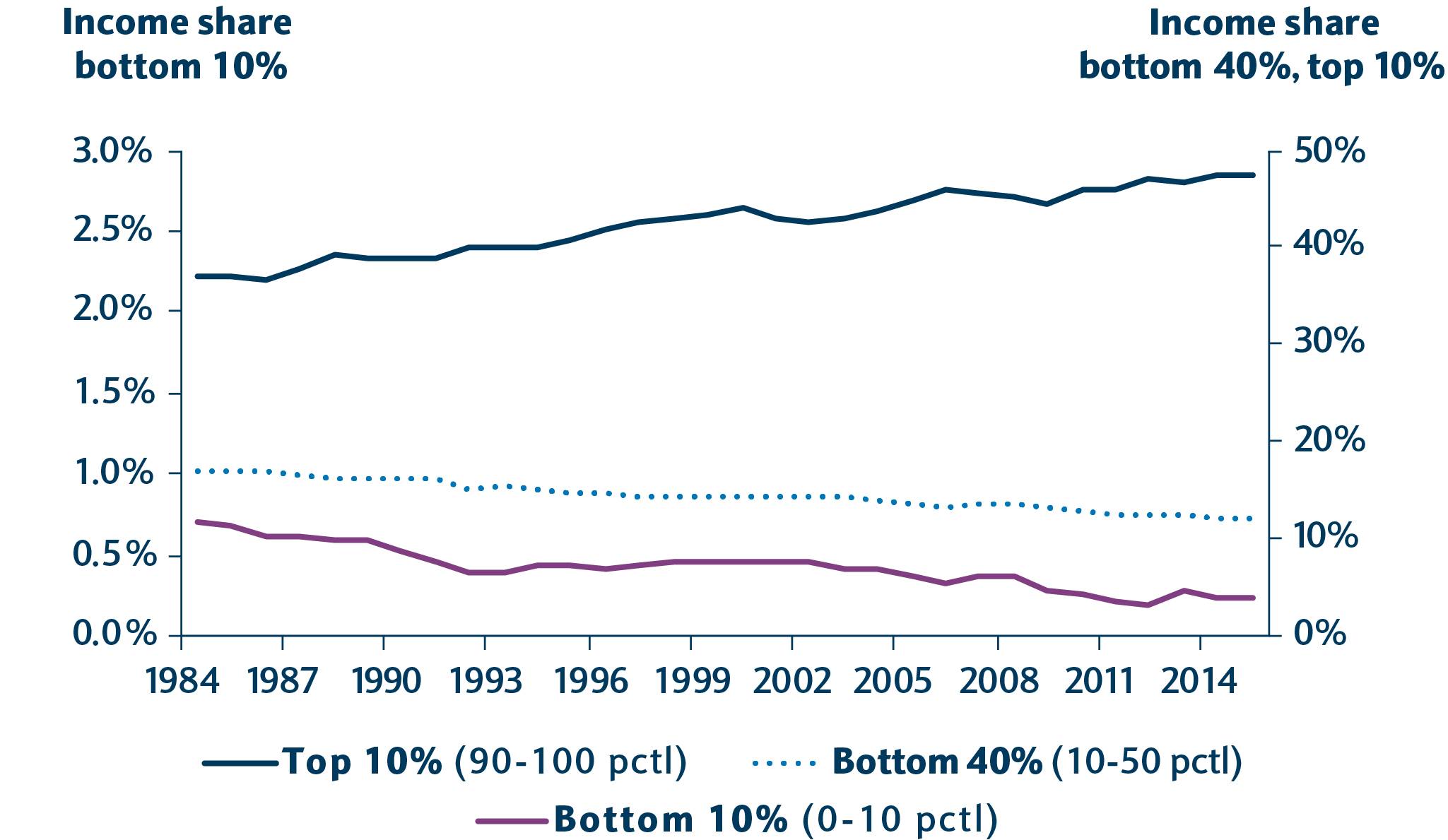 Homeownership rate across the income groups 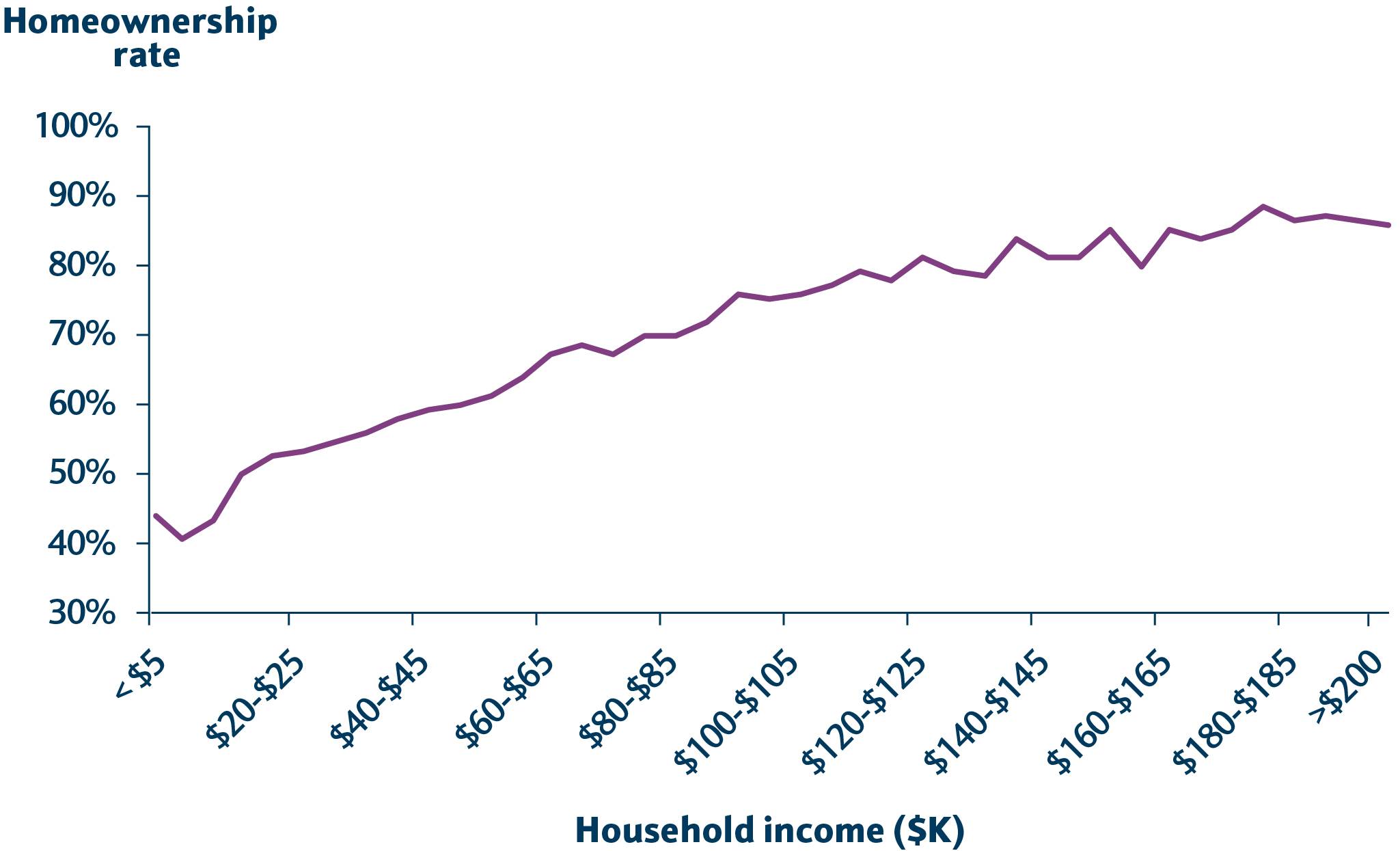 Our analysis also suggests that the negative effects of income inequality on homeownership fall disproportionately on Black households.

The homeownership rate for white households has hovered around 70% for decades, whereas the rate for Black households is persistently lower at about 45%, according to the American Community Survey. Since the Great Recession, the gap has increased, and is now at 30 percentage points, which is wider than it was before the passage of the Fair Housing Act of 1968, which made race-based discrimination in housing illegal.

At the same time, the GSE affordability targets have aimed to promote homeownership among underserved groups, including minorities. Measuring the impact of this policy on states with a larger Black population, our data suggests that the negative effect of income inequality on homeownership is 2.4 times higher in the states with the highest percentage of Black residents, while these states also accrued the largest benefits of homeownership from the affordability targets.2

The case for well-structured government support

The results of our study do not imply support for the status quo on housing finance. The current system is a patchwork of explicit and implicit subsidies, and it is likely that many of these do not contribute meaningfully to homeownership. Beyond that, we cannot ignore the lessons from the 2008 Financial Crisis and resulting bailouts.

However, our results show that the government can positively influence housing outcomes. An initiative as simple as affordability targets for the GSEs was able to mitigate about half of the effect of income inequality. We conclude that, left unfettered, the economic structure of the US would restrict homeownership relative to other developed countries.

The decisions policymakers make will become particularly important post-COVID, when both income inequality and the homeownership divide between white and Black households are likely to become even more pronounced. Therefore, any housing finance reform ought to consider the risks to homeownership facing low-income and minority populations. 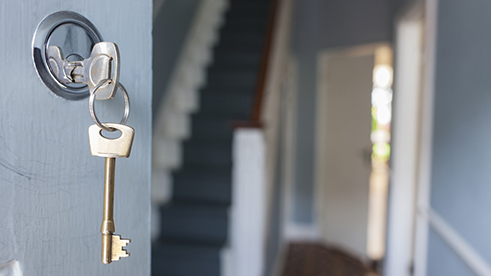 Dive deeper into these topics in the Impact Series report:

View the infographic for a summary of the findings:

Authorised clients of Barclays Investment Bank can log in to access the original Research report on this topic on Barclays Live:

Ajay Rajadhyaksha is Head of Macro Research at Barclays. He oversees the global research and strategy efforts of the economics, rates, FX, commodities, emerging markets, securitised, and asset allocation teams. He received a bachelor's degree in Electronics Engineering from the University of Mumbai, an MBA from the Indian Institute of Management Calcutta and a master's degree in International Management from Thunderbird, the American Graduate School of International Management in Arizona. Ajay is a member of the Treasury Borrowing Advisory Committee, which advises the Chairperson of the Federal Reserve as well as the US Treasury Secretary on macro-economic and market issues.

Zornitsa Todorova is an Assistant Vice President in the European Economics Team, based in London. Prior to joining Barclays in 2019, she was teaching risk management and investments at Bocconi University and Berlin School of Business and Innovation. Miss Todorova has conducted research on the intersection of empirical asset pricing, monetary policy and production networks. Her research has been published in peer-reviewed academic outlets such as The Journal of Corporate Ownership and Control and The Review of Finance and Banking (forthcoming).