With 80% of the world's biodiversity found in the sea, it’s little wonder that approximately $2.5 trillion in revenue1 is extracted from ocean resources each year. Yet unsustainable practices have led to a decline in the health of our oceans.

One factor is the pressure to meet consumer demand, with consumption of seafood, a major source of healthy protein, doubling since the 1960s.

Our Research analysts examine practices that ensure the wellbeing of our oceans while also supporting the “Blue Economy”, which provides a livelihood for more than three billion people worldwide.

Covering 70% of the Earth’s surface, the ocean provides us with an abundance of resources. The ocean economy, also known as the "Blue Economy", is defined by the World Bank as the “sustainable use of ocean resources for economic growth, improved livelihoods, and jobs while preserving the health of the ocean ecosystem.” 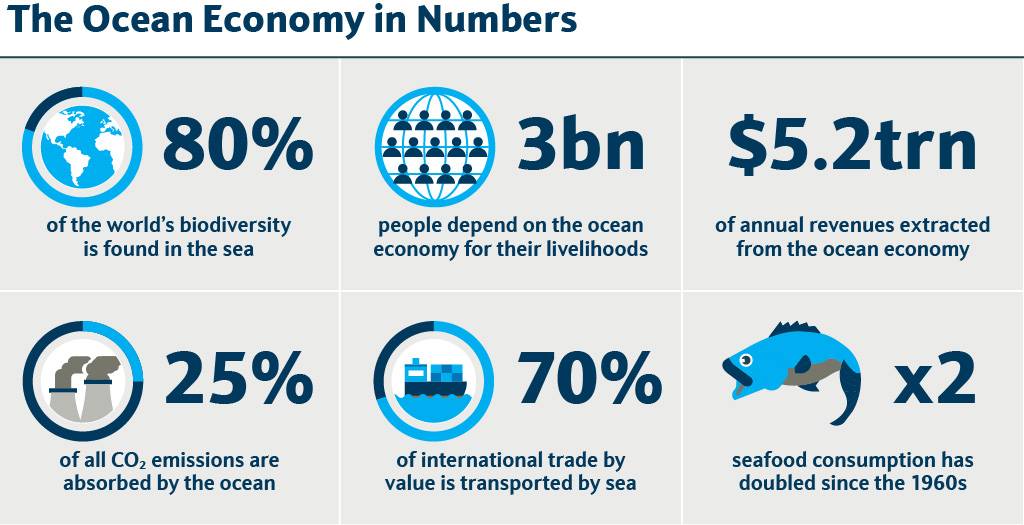 The ocean economy, while a nebulous concept, can be divided into the following four sectors: 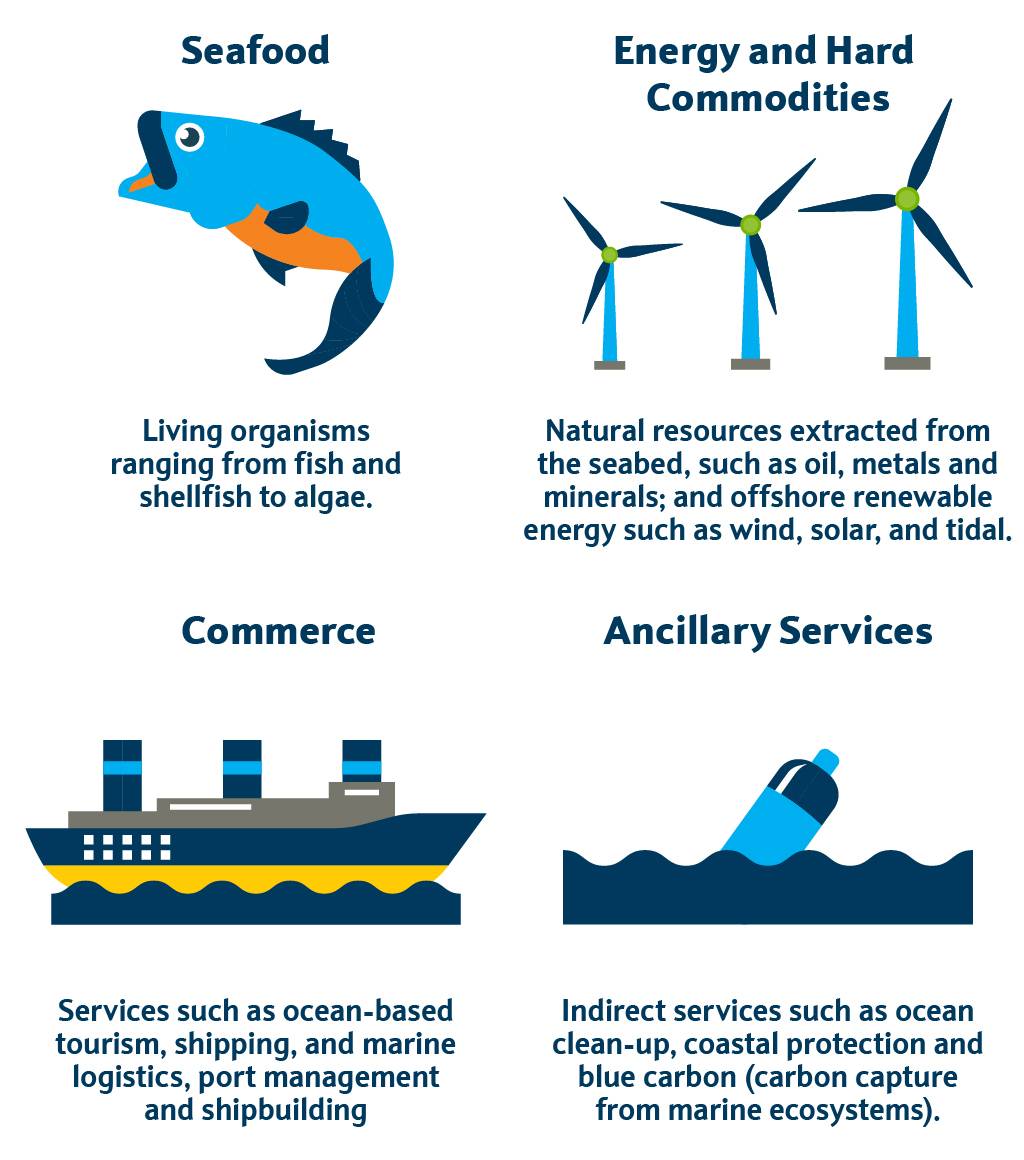 Over the past six decades, annual fish consumption has increased by 3.1% on average –double the world population growth rate. This is putting pressure on current fishing methods. At the same time, the seafood industry has faced growing scrutiny of its fishing practices.

In response, major seafood-producing countries have introduced regulations and legislation to guarantee sustainability in the ocean economy and in particular seafood. These include:

Amid mounting concern about illegal, unregulated, and unreported (IUU) fishing, in December 2020 Japan reformed its fishery laws for the first time in 70 years, introducing a new law that bans IUU seafood from entering the market, while also updating its registration requirements for vessels and fish.

Responsible for 15% of the world's wild fish catch, China has implemented the Distant-Water Fishing Management Regulations to combat illegal fishing by Chinese vessels in other coastal nations’ waters. There are also new rules on vessel registration, stricter certification requirements, higher penalties for non-compliance, and a new 'blacklist system’.

To tackle the use of chemicals in seafood production, which it says leads to an estimated 33,000 human deaths in the EU each year, the European Commission has committed to reducing the sale of antimicrobials for farmed animals in aquaculture by 50% by 2030.

In December 2020, fourteen countries which together oversee 30% of the ocean’s exclusive economic zones formed the High Level Panel for a Sustainable Ocean Economy. Countries including Japan, Chile, Indonesia and Norway committed to managing their waters 100% sustainably by 2025 and pledged to restore wild fish stocks and harvest at sustainable levels by 2030.

The High Level Panel for a Sustainable Ocean Economy estimates that ‘sustainable ocean-based interventions' in food production can yield over $6.7 trillion in benefits.

1. Sustainable feed: Fish feed is the highest input cost in seafood production (c.50%). As fish stocks plummet and overfishing becomes widespread, feeding seafood with fish would be neither economically nor environmentally wise. Alternatives include insect-, algae- and microbe-based feeds, which are not only more affordable, but also more nutritious.

Growing demand is pressuring fishmeal prices, in part due to supply constraints 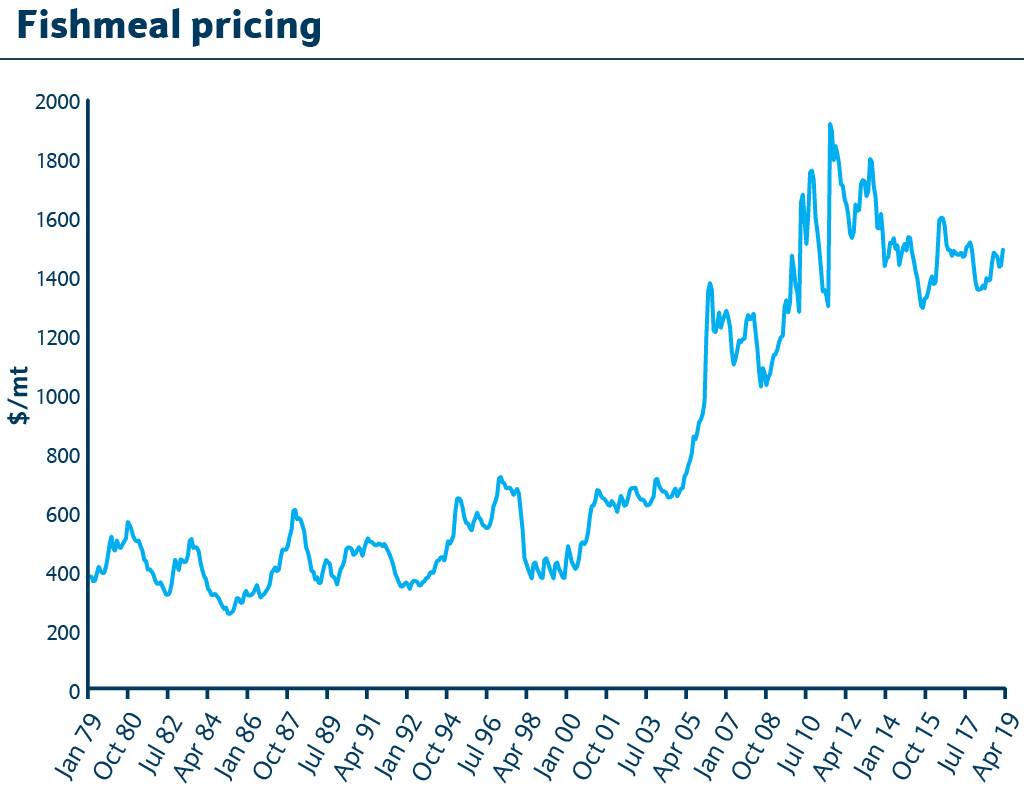 3. Technology in aquaculture and fisheries: Advancements in technology such as Recirculating Aquaculture Systems (RAS), have enabled the expansion of inland self-contained fish farms. Satellite imagery and use of blockchain systems can also aid transparency and traceability, helping reduce IUU fishing, food fraud, and poor treatment of workers on vessels.

Continuation of existing fishing and aquaculture practices could lead to further collapse in fish stocks, degradation of marine biodiversity, and failure to meet the growing demand for sustainable protein. But by investing in the ocean economy, we can not only improve the ocean’s health, but also unlock its vast assets, estimated to be worth at least $24 trillion by the WWF.

While changing course and addressing sustainability concerns will require material investments, our analysis suggests that investment opportunities in this area have a high benefit-to-cost ratio.

For each dollar invested in the ocean economy, $5 of benefits can be achieved. This benefit to cost ratio is even higher in certain industries, increasing to 10:1 for ocean-based food production, and up to 12:1 for offshore wind production. 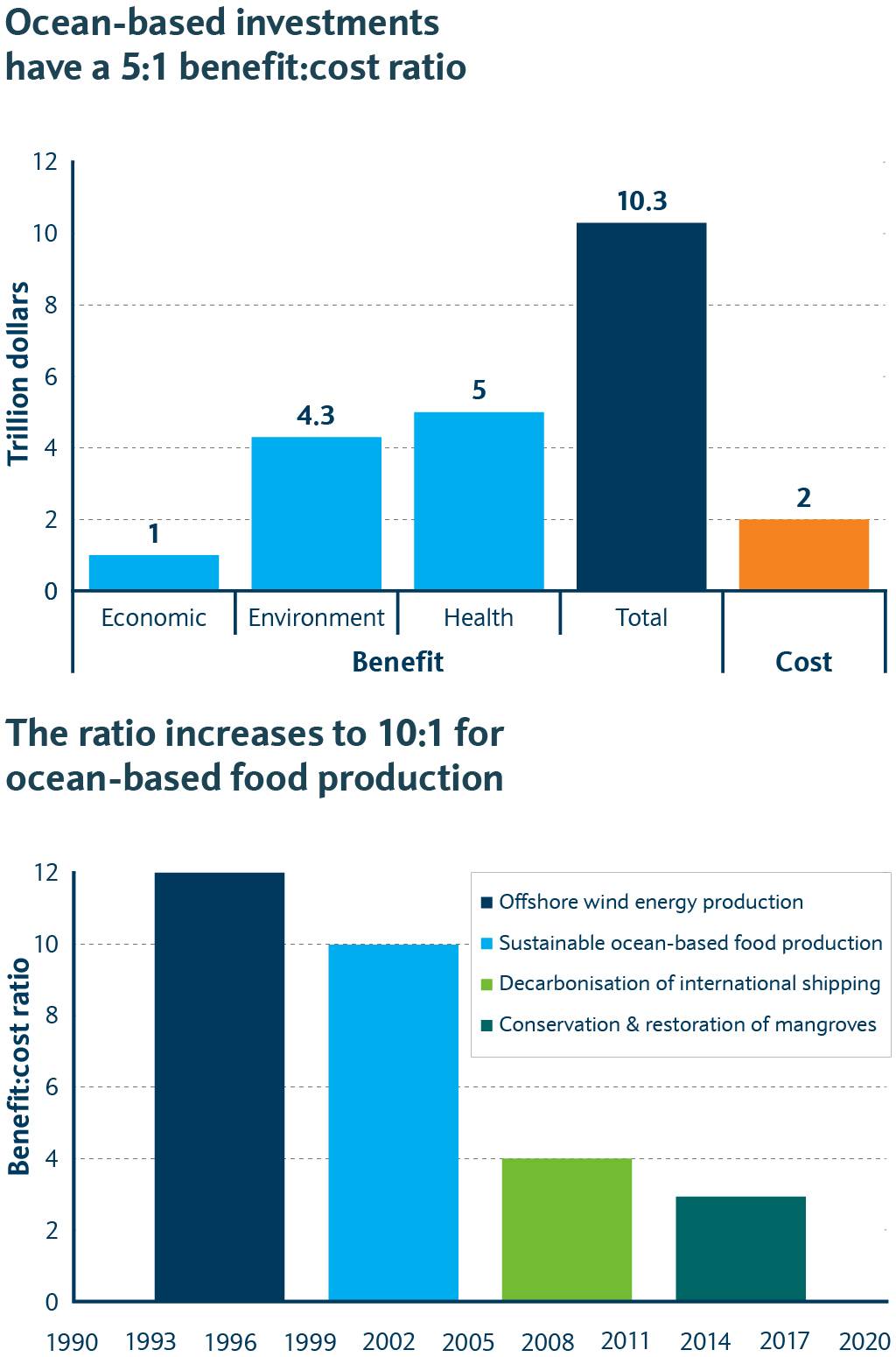 Katherine Ogundiya is a member of the Sustainable & Thematic Investing team within Equity Research at Barclays. She joined the team in August 2018, following completion of the Compliance graduate scheme at Barclays. Katherine read Law at the London School of Economics.

Anushka Challawala is a member of the Sustainable & Thematic Investing team within Equity Research at Barclays. Anushka joined the team in September 2018 following two years covering European Telecoms. Anushka graduated with a BSc in Management from the University of Warwick.

Hiral Patel is the Head of Sustainable & Thematic Investing within Equity Research at Barclays. Hiral joined the team in June 2018 following five years covering the European Technology, Payments and FinTech sector. Prior to that, Hiral qualified as a Chartered Accountant with KPMG, where she worked in Audit covering Financial Services. Hiral graduated from the University of Warwick with a degree in Economics, Politics and International Studies.

Laia Marin i Sola is a member of the Sustainable & Thematic Investing team within Equity Research at Barclays. Laia joined the team in October 2020 and holds a Master of Science in Finance from ESADE Business School in Barcelona and graduated from Bocconi University in Milan with a degree in International Economics, Management and Finance. 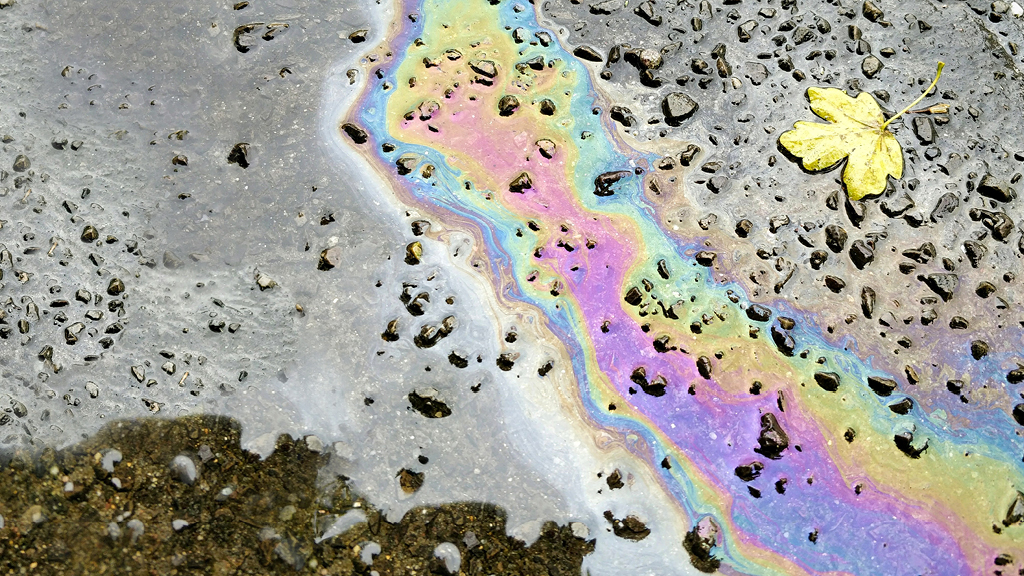 Decarbonisation is a major global challenge. Our analysts have identified five key areas of focus over the coming 30 years for delivering the net zero pledge.

ESG issues brought into focus by the pandemic could be a top priority for corporate boards and asset allocators this year. Our analysts highlight 10 key ESG themes set to have a direct impact on equity and credit markets in 2021.