Robots at the gate: Humans and technology at work

We are in the throes of a digital revolution, giving rise to much debate about the power of technology to reshape the nature of work. Many are highly optimistic about the economic potential of technological advancements, such as machine learning, but there are also fears that clever robots will take over human jobs, with potentially devastating consequences for individuals and society at large.

But the picture is not clear-cut, and students of labour and economics, and in particular supply and demand dynamics, can be forgiven for being confused about the effects increasing automation may have on the macroeconomic outlook.

Here we look at possible explanations for three automation-related economic effects where expectation and reality have not yet coincided.

Explanation: There are two main influencing factors. First, there is a time lag between the introduction of a technological disruption and a measurable impact on the workforce. In the first decade after introduction, soft automation, where only parts of a job are automated, is more dominant than hard automation, where technology fully substitutes labour. Second, history indicates that new technologies do not necessarily reduce the number of available jobs. The advent of cars meant the loss of horse-related jobs, but the creation of many more roles in auto production, garages, etc.

Reality: Wages have been suppressed since the turn of the millennium in every major economy, despite an increase in employment.

Figure 2: Labour share of US national income by industry: 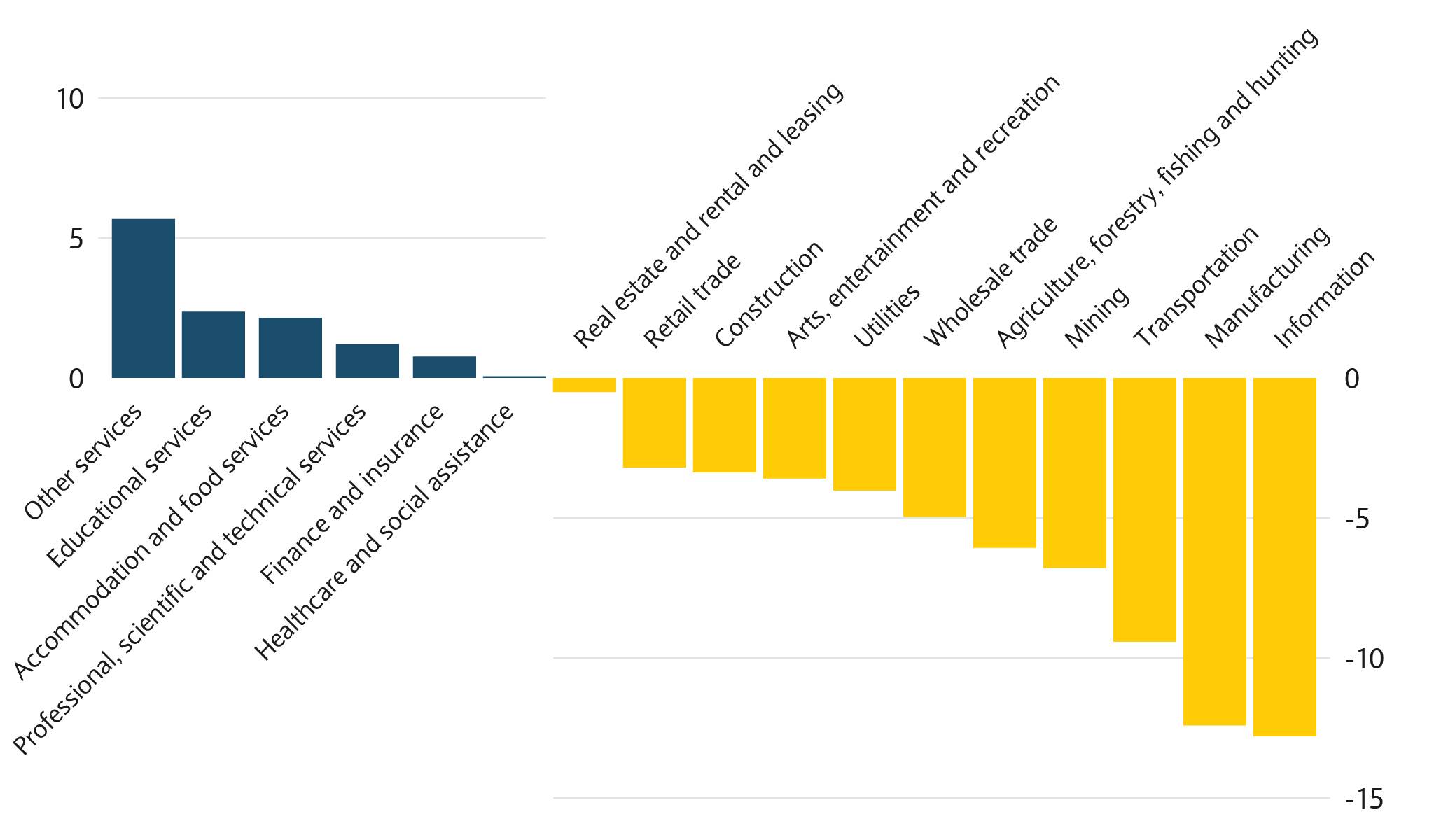 Explanation: Following the financial crisis of 2008, workers might have been more reluctant to move jobs and less confident in their pricing power. But 10 years later, there are other factors at play. According to the IMF, technology is the biggest reason why the US labour share of national income has been declining, as shown in Figure 2, with automation playing a role in about 50% of that decline.1

For the first several years or decades, even the most path-breaking technologies end up automating specific tasks within a job, not the job itself. In doing so, technology frequently ends up lowering the skill-set needed to do a job, in turn expanding the pool of potential workers, which then acts as a drag on wage growth.

The trucking industry provides a good example. In 1980, the median trucker wage was about $38,000. Four decades on, median wages are still close to that level. We believe that soft automation is to blame. The introduction of technology such as power steering, cruise control and automatic braking has made the job of the truck driver easier and less specialized – and therefore less able to command high wages.

Reality: Labour productivity growth has slowed sharply in OECD economies over the past several years, predating the 2008 financial crisis. From 2005 to 2015, the OECD estimates that aggregate productivity in 30 major economies was just over 1%, compared with 2.5% in the previous decade – a marked decline in productivity and global growth.2

Explanation: Most of the path-breaking leaps in technology – the generation and collection of big data, the collapse in data storage costs, the advent of machine learning – largely occurred after 2005, so why hasn’t productivity improved? The past offers an explanation: Most of the great technological leaps of the past 150 years – including the invention of the automobile and electrification – happened around the turn of the 20th century.

Yet productivity languished in the following decades, even as these game-changing inventions became mainstream. By contrast, productivity growth averaged 1.5% or more in every decade from 1940 to 1980, including a dizzying 3.3% between 1950 and 1960, a period not associated with economy-changing technological advances (Figure 3). 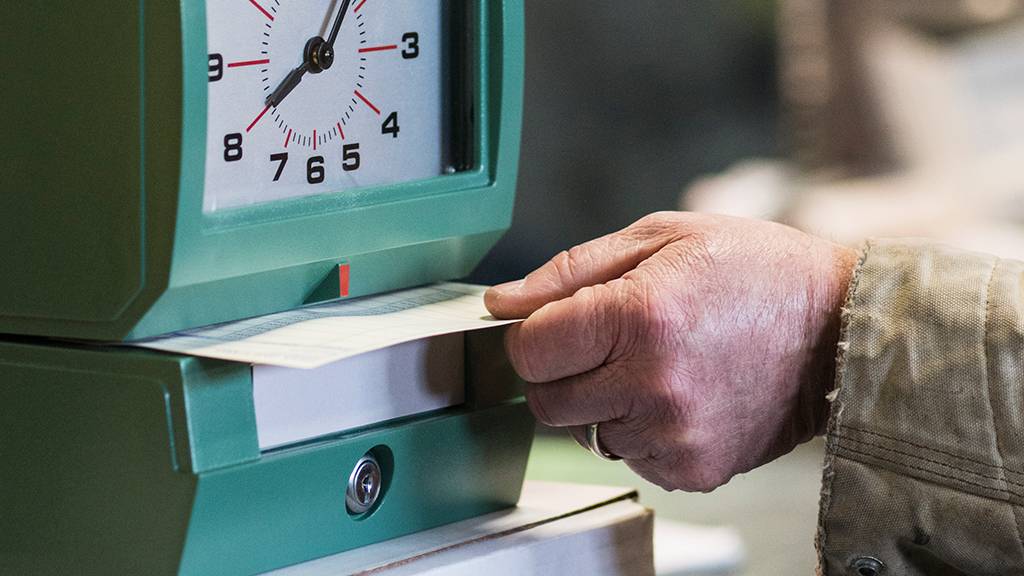 Podcast: Goldilocks in developed economies: How long can it continue?

Unemployment is at record lows, yet wages are stagnant. What’s the holdup? Our Research analysts debate cyclical vs. structural explanations and the economic implications of both. 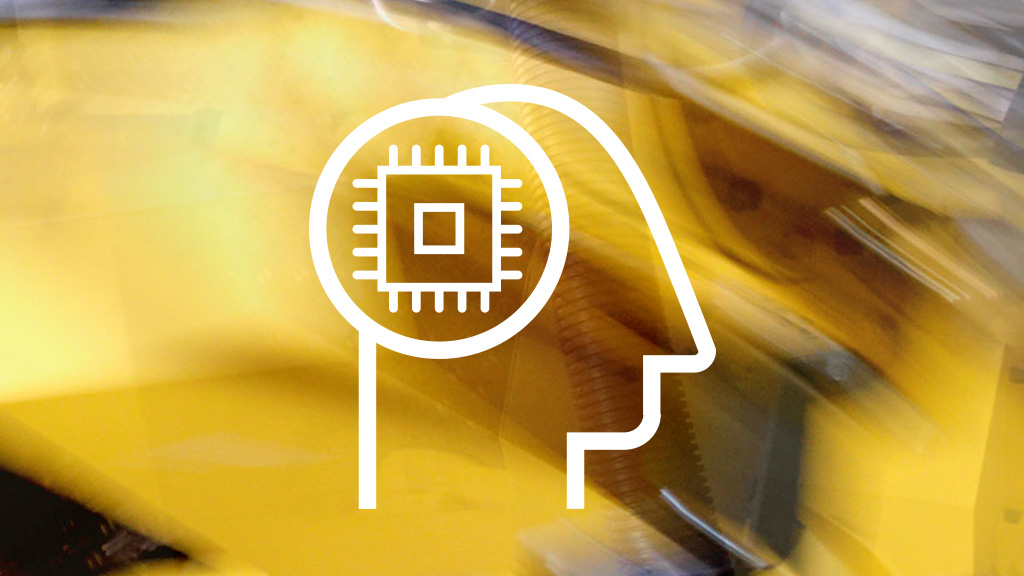 Machines are learning to do increasingly complex tasks. Will people be replaced by technology in the workplace anytime soon? 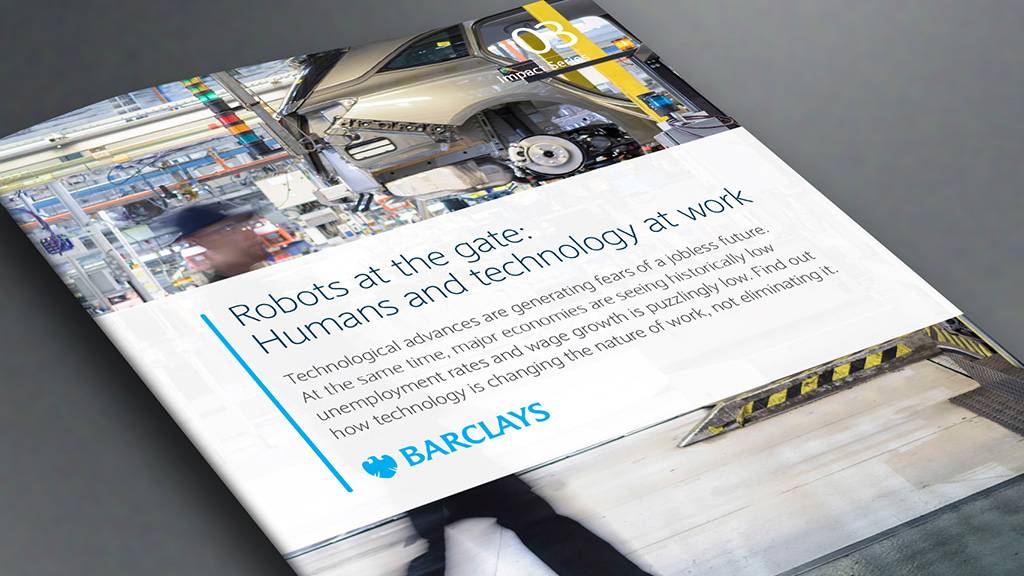 The economic effects of new, groundbreaking technologies often take time to surface. It could be years – decades even – before recent innovations have a real impact on productivity and wages.

The introduction of breakthrough technologies seems to follow a predictable pattern. When economies of scale kick in on the production side, consumer behaviour starts to adapt. Companies then use the technology to refine (and often change) their business models, and, through supplemental innovations, adoption is greatly increased.

It is very difficult to forecast when a new technological spurt will show up in the productivity statistics. But if a technology truly makes an impact – as electrification and the automobile were – adoption ultimately moves at an exponential pace. The technological breakthroughs of recent years could yet play a fundamental role in reshaping our working world.

Ajay Rajadhyaksha is a Managing Director and Head of Macro Research at Barclays, based in New York. He oversees the global research and strategy efforts of the economics, rates, FX, commodities, emerging markets, securitised, and asset allocation teams. Since joining Barclays in 2005, Mr. Rajadhyaksha has held various positions, including Co-Head of FICC Research and before that, Head of US Fixed Income Research and US and European Securitised Research.

Previously, he worked at Bear Stearns, where he started in Mortgage Strategy before moving to the Interest Rate Derivatives Strategy team. Mr. Rajadhyaksha received a bachelor’s degree in Electronics Engineering from the University of Mumbai, an MBA from the Indian Institute of Management Calcutta and a master’s degree in International Management from Thunderbird, the American Graduate School of International Management in Arizona.

Aroop Chatterjee is a Director and Head of FX and EM Macro Strategy, Americas and is based in New York. At Barclays since 2007, his previous roles include Head of European and LatAm Local Markets Strategy and Head of FX Quantitative Strategy. Mr. Chatterjee’s research focuses on top-down macro and quantitative strategy and their application to FX and EM rates markets. He holds an MBA from the University of Chicago Graduate School of Business and a bachelor’s degree in Materials Science & Engineering and Economics from Northwestern University.

Download the full report, Robots at the gate: Human and technology at work (PDF, 3MB) for further analysis from Barclays’ Impact Series.

Authorised clients of Barclays Investment Bank can also log in to Barclays Live to read in-depth analysis on this theme as published in the 63rd annual edition of Barclays’ Equity Gilt Study.